The objective of this meeting is to analyse the changes in the relationship between private collections and museums, with the intention of proposing new models and possible alliances that promote the combination of ethical and artistic criteria in the configuration and functioning of collections. The concept of the collection has undergone a series of transformations that demonstrate the need to review terms like common heritage, memory and shared heritage within a framework of global collaboration between museums and private collecting. 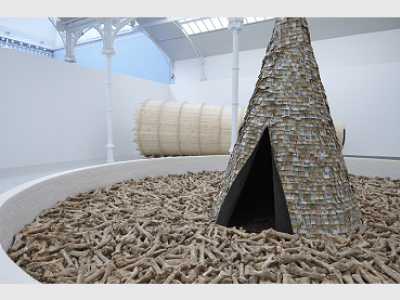 A public activity within the 3rd Meeting of European and Latin American Museums, this lecture examines the crossroads that contemporary museums are currently facing. Motivated by the new notions of collection and art, but also aware of global interests, Ticio Escobar examines the potential and the danger of this new institution.

Modern times, and especially contemporary times, have led to a crisis in the traditional museum model. The basic function of this model is the custody of forms of heritage that express and sustain local imaginaries or that define certain historical stages or styles. Modernity complicated this model and as a result it was altered, the museum being entrusted with new tasks in the areas of research, documentation and archiving, and also a greater engagement in social and community development and a new degree of attention to citizen presence. But it also put the museum institution face to face with the complicated task of reconciling its new democratizing objectives with the potent interests of the art market.

The speed of the transnationalisation of culture has made these questions even more pressing.  Now the museum not only must open up to the public space, it must open up to a public space that is largely globalised. This space is one that imposes different configurations of social imaginaries, most of which are based on mobile and provisional identities. Museum space has thus become crisscrossed by images of different cultures and moved by a plurality of intentions and purposes.

Finally, the collapse of the modern autonomy of art has led to the crisis of the museum closed behind a definitive notion of art. This promotes, in consequence, the contamination of museum spheres, which are forced to confront the blows of history and the infiltration of disciplines, problems and concepts that were previously unknown in the strict domains of art. This change of paradigm requires a new definition not only of the concept of museum but also of art itself, a task that began decades ago and entails the unexpected return of ontological perspectives that had been left behind. This lecture seeks to explore these questions and, with absolutely no intention of proposing models, to examine specific cases that constitute possible alternatives in the rethinking of museums.

Ticio Escobar (Asunción, 1947) is a researcher, curator, art critic and essayist. He is the author of the National Law on Culture of Paraguay. Founder and director until 2008 of the Indigenous Art Museum / Mud Museum, he is a former Secretary of Culture of the government of Paraguay. He has been the curator of the São Paulo Biennial and has also curated Paraguay’s representation at numerous other biennial events. He has published, among other studies, La belleza de los otros: arte indígena del Paraguay (1993), Sobre cultura y Mercosur (1995), El arte en los tiempos globales (1997), El arte fuera de sí (2004) and La invención de la distancia (2013).

The growing weight of private capital and the simultaneous decapitalisation of state art institutions bring about challenges and various unknowns when establishing criteria of value and social dimensions that go further than those imposed by the market. This affects the entire system, including private and corporate collecting, which requires recognisable frameworks of reference and visibility. In addition, globalisation demands a harmonisation of the different ways of understanding the relationship between private and public in different cultural contexts.

Actividad pasada February 19, 2014
Panel 2: Transformations in the concept of collecting. Towards a common heritage

The information society and the breakaway from old institutional structures have deeply transformed the notions of heritage based on the accumulation of objects, exclusivity and national identity. There is an urgent need to seek ways to meet the emotional demands and thirst for democratic participation of new societies, as well as methods to combat the displacement of the local that has been intensified by international economic flows.

The session is comprised of two public discussions between four participants, in which they will share the various issues discussed above in the tables.