This first retrospective of the work of Aki Kaurismäki (Orimattila, Finland, 1957) in a modern art museum complements the Museum’s research into the 1980s as the origins of contemporaneity, but it inevitably surpasses this framework. With a filmography that is the literature and at the same time the image of cinematographic modernity, that is theatrical parody and documentary realism in equal proportions, that links utopia to impotence and humour to tragedy, Kaurismäki’s cinema is based on the paradoxes and fault lines of contemporaneity.

Organised into eight sessions, with a master class and a final carte blanche program of films selected by the filmmaker himself, each session takes the name of a popular song used in the director’s filmography. At the same time, the sessions establish a dialogue between a feature-length film and a short film from this foundational stage, many of which have been recovered, subtitled and screened for the first time in cinema.

Faced with a degrading reality, the main weapon of Aki Kaurismäki’s cinema has been to construct its own cinematographic space as a sphere of resistance. The filmmaker has taken it upon himself to examine, coldly and with indifference, the workings of a society that acts as a machine which shatters the individual. However, Kaurismäki has also proposed in his stories the counterpoint to this idea, and has set counterfires wherever the poorest classes have found refuge and reached a truce of silent solidarity and obstinate love.

With the title After the Shipwreck, this program examines the search for a promised land or a utopian community in the filmmaker’s earliest works.  The dialectic between resistance and flight, between everyday violence and the search for utopia, between sordidness and the sublime, is especially present in his early productions. The characters appearing in this early stage are declassed persons – those who clash violently with Finnish society immersed in a neoliberal process of change and “normalization”.

Despite, or perhaps because of, its melancholic nature, these films have a combative political dimension that does not involve dogmas or the teaching of lessons. On the contrary, this dimension can be seen in the matter and the manner of operating in the distribution of the sensible, to use the words of Jacques Rancière, drawing horizons of resistance with the methods of cinema. 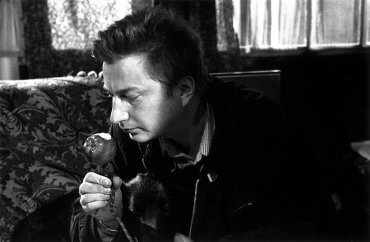 Aki Kaurismäki in conversation with Loïc Díaz-Ronda and Pilar Carrera

This inaugural session offers viewers the chance to analyse, in the company of the filmmaker, the foundational stage of his filmmaking (1983-1996). His work during these years is defined by the irreducible figure of the marginalised worker and the tension between realism and theatricality, characterised by a dense web of references and allusions to modernity in film, the value of the obsolete –in the sense of the dated as opposed to the present and of an objectual world composed of goods without value– and the presence of literature alongside a sense of humour. 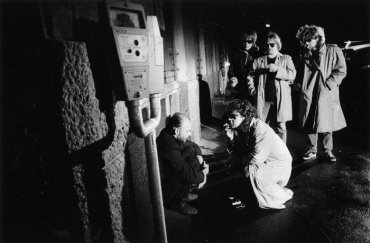 With Calamari Union, his second feature film, Aki Kaurismäki, fragmented into 17 different personalities, sets out on a fatal search for the El Dorado dreamed of by Finnish youth in the mid eighties. Twenty years later, the filmmaker, now meditative and serene, seems to have found it in a peculiar corner of southern Europe that looks nothing like what was expected or dreamed about. This program revolves around the idea of a promised land, of restlessness and rest. 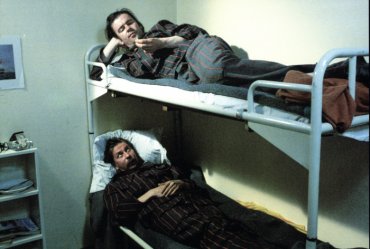 Session 2. Over the Rainbow

From the 1980s forward, Kaurismäki never ceased to depict the dehumanization of his country. Like the grotesque These Boots, the film Ariel shows the other side of European prosperity, through the exodus and descent into hell of its orphan hero and the hope for a hypothetical redemption somewhere over the rainbow. The second part of his Proletariat Trilogy, dedicated to the "memory of Finnish reality," this film shows, in a cruel and picaresque manner, a post-industrial society based on the sacrifice of workers. 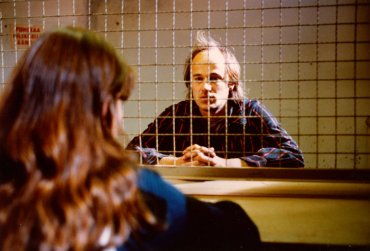 Crime as a temptation or wish to subvert the social order. With his first feature-length film, a contemporary transposition of the novel by Dostoyevsky, Kaurismäki offered a concise description of a violent moral dilemma. The filmmaker thus began a free and spontaneous relationship with great literary texts, which would culminate some years later with his iconoclastic and anti-literary revival of the Shakespearean tragedy. Rich Little Bitch is a furious fragment of hate and rock'n'roll taken from Hamlet Goes Business. 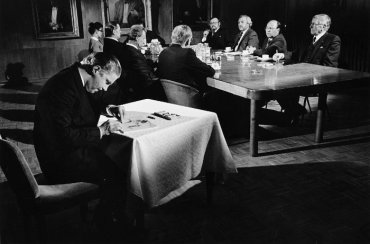 Session 4. Always Be a Human

In Kaurismäki’s peculiar inversion strategy, the American boxer from Rocky VI cheerfully takes a beating instead of giving it. In these heartless times, an old aristocrat has become a cynical businessman who is about to plunge his inherited industrial empire into a speculative venture. With great clarity and formal beauty, Kaurismäki foretells the systemic crisis of financial capitalism and, in the company of some smoked herring and a bottle of vodka, dreams of the much desired demise of the Western imperialistic act. 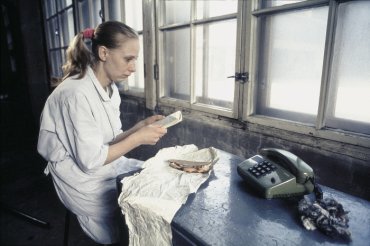 Session 5. The Time of the Cherries

Opening with a masterful mechanical ballet, The Match Factory Girl concludes the Proletariat Trilogy and also revives, in a macabre and melodramatic fashion, the nihilistic bent typical of the filmmaker’s early works. Or, how alienation from family and work, combined with the cheap dreams promoted by popular fictions, has liquidated any chance of achieving a true working-class culture. In the short The Foundry, Kaurismäki reinstates the genuine desire of workers in the factory and in the cinema which is, in his mind, one of the last places to remain free, where the imagination can run wild. 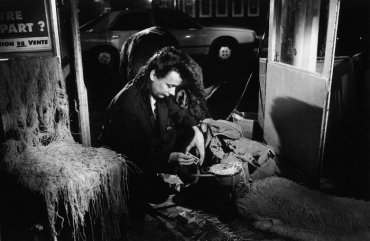 Session 6. Don’t Hurry With Me

Those Were the Days
1991, 35mm, original version with Spanish subtitles, 5'
Courtesy of the Finnish Film Foundation, Helsinki

In this film, Kaurismäki puts forward a complex vision of romantic relationships, in reaction to a certain deformed view of happiness. For the archetypical character Nikander, the road to love is full of obstacles. The first film of the Proletariat Trilogy, Shadows in Paradise contains all the basic notes found in the director’s musical scale. In it, marginalised characters with good hearts try their best to survive and avoid the shipwreck imposed on them by an indifferent society. Fifteen years later, in the short film Those Were the Days, Kaurismäki tells a story of love at first sight, in the key of poetic realism. 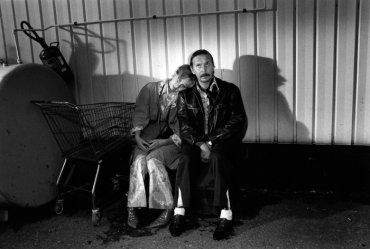 Session 7. You Won’t See a Tear

The road movie Take Care of Your Scarf, Tatiana is a declaration of the love that Kaurismäki, now in voluntary exile, feels for Northern landscapes and the idiosyncrasy of his fellow countrymen. Clumsy and seemingly heartless, the filmmaker’s beloved outsiders fight against a world that is strangely cold and violent, giving priority to values such as altruism, compassion and dignity. A pre-modern code of honour, based on humour and modesty and also on the to and fro of looks and bodies, in which words and language only get in the way. Following this code, in Dogs Have No Hell a man gives a new direction to his life while hardly saying a word. 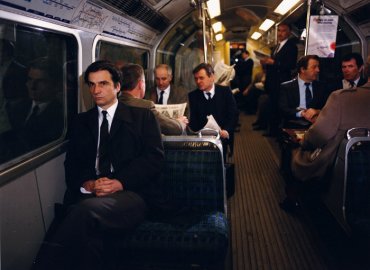 Session 8. Before I Die

Thru the Wire
1987, 35mm, original version with Spanish subtitles, 6'
Courtesy of the Finnish Film Foundation, Helsinki

Fleeing or isolating himself leads the kaurismakian hero to his own disappearance. Often, death awaits his characters at the end of their escape. In this session, the codes of film noir provide the director with a tool for reflecting on the tragic destiny of different beings, ones that society considers useless. In I Hired a Contract Killer, the main character lives in an unrecognisable city in England, one that is totally recreated and therefore undefined. This city is simultaneously the setting of a tragedy and an area of great possibilities. As another major character says: the working class have no fatherland. 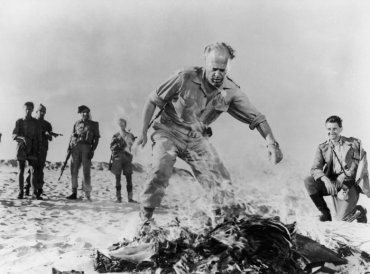 Considered by Godard to be the paradigm of auteur film, Bitter Victory by Nicholas Ray is a complex war drama set in the British campaign in North Africa during World War II. Along with this film, the session includes the short by the comedian W.C Fields, Fatal Glass of Beer, an anarchical parody of melodrama that connects this session with the use of references to and parody of melodrama’s dramatic codes, and also with a particular revision of cinema’s auteur stories, aspects also characteristic of Kaurismäki’s work.

Tickets required. Tickets may be picked up free of charge at the Sabatini Building ticket window starting two days before each session. Capacity: 140 seats