This audiovisual series looks at the 1980s, and that decade’s prolongation into the 1990s, as a genealogy of much of the dialectics that explain the contemporary, as a time period and cultural category. The 1980s have traditionally been considered in terms of market extension and as the articulation of a pensive, self-referential artistic sphere. Hence, the appeals to the final moments of identity-centred historicism, appeals that are visible in the returns to painting in Europe, or to the theses of the end of history as a justification of global neoconservatism, have resulted in this decade being considered through the paradigms of spectacle and banalisation.

Without completely rejecting it, The image is a virus confronts and qualifies this thesis. Taking as its starting point a reference to William Burroughs, a decisive writer for the interests and themes of this decade’s counterculture, this series compares the idea of the image as contagion and transmission to the diagnosis of implosion and banalisation that dominates the theoretical analyses of the post-modern image. In doing so, The image is a virus does not seek to replace one paradigm by another, but rather to present the 1980s as a decade that was, more than spectacular, decidedly bipolar, characterised not by the predominance of great narratives but by a series of unresolved tensions that will dominate the constitution of the contemporary period. The series, which accompanies and expands upon the discourse of Minimal Resistance, aims to show over its nine sessions some of these contradictions: in contrast with an all-embracing institutionality, the formation of artistic activisms and collectivisms; in contrast with the specificity of art, its blurring into ways of life mixed with music as an experience and form of resistance; in contrast with the globalisation starting in 1989, the territory as a place of reconstruction and memory; in contrast with the return to the myth of the artist, a tragicomic parody of the artist trapped within the art system.

In short, The image is a virus undertakes a revision of the 1980s and its echoes, doing so from the perspective of some of its fractures, showing a decade characterised by a series of narratives in constant tension.

This series is the second edition of the program of Histories of cinema, which looks at how the discourses of the Collection are seen in film. Organised by Museo Reina Sofía within the framework of “The Uses of Art,” a project by the European museum network L’Internationale. 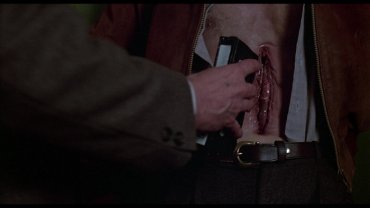 Using conspiracy as an explanation for the present is a common mechanism in a cinema which, according to Fredric Jameson, is incapable of describing the powers and institutions of the new political scene. In Videodrome, Cronenberg plays a part in this situation, showing how a sect seeks to gain control by broadcasting television programming that features violence and pornography, and that not only affects the viewers' desires but also their perception of the world. The ideas of simulation, implosion or crisis of the real, which are predominant in this decade, appear in this film. At the same time, Videodrome describes a paradox: film approached from the perspective of video, or video, the decade's most significant medium, introduced through film. 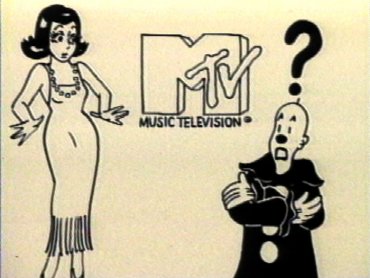 Session 2. Parodies of the subject

General Idea. Shut the Fuck Up
Video, 1984. In English with Spanish subtitles, 14’

Television, the protagonist of a large part of the associative and guerrilla experiences of 1970s artistic practices, becomes a homogenizing medium in terms of information and audiences during the 1980s. This session is dedicated to analysing how different artists negotiate this idea. Artists show a fascination for the immediacy, massive reception and new formats offered by television, and at the same time they reproduce the stereotype of a satirical and unidimensional subject trapped in the television spectacle. Thus, collaborations with general networks, such as those undertaken by Dara Birnbaum, Richard Prince and Lynda Benglis with MTV, end in frustration, while the experiences such as those of General Idea or Jaime Davidovich criticize the medium, appropriating its logic. Both cases anticipate a new territory, one that is complex and inevitable: the relationship between art and cultural industries. 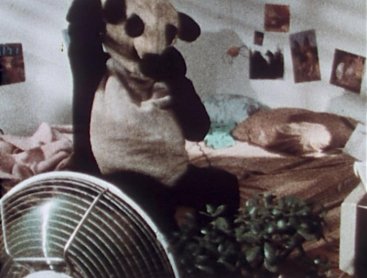 Session 3. The artist of the cynical reason

This session reflects a series of critical and satirical strategies developed in response to an art system lacking external projection. Incapable of articulating an effective intervention that transforms the circulation and reception of art, artists use the resources of modernity, knowing paradoxically that the aims pursued by modernity are no longer possible. Fischli & Weiss give a carnivalesque performance in which their alter egos, the characters Rat and Bear, use caricature to describe how the art market works. Institutional critique, common in the 1970s, is shown to be limited and to have run its course, in the theatricality used by Andrea Fraser. Kippenberger, enfant terrible like none other, mocks exhibition rituals in a liberation revealing more melancholy and indifference than subversion. Rodney Graham, in the 1990s, puts experimental film resources (such as the loop and the film apparatus) to work against themselves. 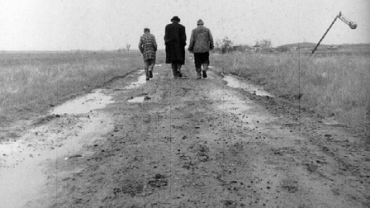 Session 4. Where is the West?

At a time in which cinema stands out for no longer being cinema, Béla Tarr represents a search for truth, using the idiosyncrasies and traditions of the medium itself. His realism, closely linked to the material, produces contemporary allegories for a time which, following Jacques Rancière, is no longer that of the present. A turning point, Sátántangó has been compared in importance to Germany, Year Zero (Roberto Rossellini, 1948). The film portrays a moment of moral debacle resulting from the failure of a communal experiment, that of a collective farm in post-Communist Hungary. Lasting over seven hours, the film is a tragic and poetic defence of cinema as a historical monument. It therefore not surprising that Susan Sontag described it as devastating, enthralling for every minute (…), I’d be glad to see it every year for the rest of my life.

Paper Tiger Television. Lines in the Sand. Chapter of the series The Gulf Crisis TV Project
Video, 1990. In English with Spanish subtitles, 28’

Jasmila Žbanić. After, After
Video, 1997. In Bosnian with Spanish subtitles, 16’

The year 1989 marks the arrival of a new social order all over the world. The fall of the Berlin Wall leads to the end of the communist regimes in Central and Eastern Europe, with decisive events such as the Rumanian revolution and the disintegration of the ex-Yugoslavia. In Latin America long-standing dictatorships come to an end and democratic elections are held, while in China, still underestimated economically and politically, the student massacre at Tiananmen Square takes place. In this new geopolitical reality, still churning and uncertain, the undisputable primacy of the United States is mixed with a series of emerging powers, and policies of economic and arms colonization come into play, as the invasion of Panama and the Gulf War demonstrate. A number of artists question this new territorialisation of ideology, in the words of Hito Steyerl, in narrations tied to documentary. This session contains various proposals of this nature: one episode of Paper Tiger Television about oil as a political axis, works by Ursula Biemann and Hito Steyerl on the new class differences in the neoliberal global scene, and by Jasmila Žbanic on the recovery of memory. As an epilogue, a short piece by Steyerl shows a model of the Berlin Wall in a theme park in Brussels, being demolished over and over again. 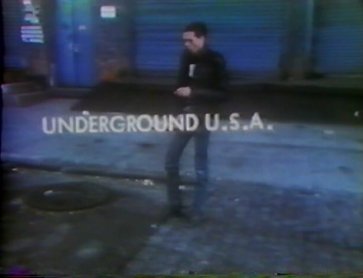 During the urban decline of New York City, between the end of the 1970s and the beginning of the 1980s, a series of alternative attitudes and communities arise in the margins. In them artistic experimentation becomes a form of social relations and also of subjective identification. Against this backdrop No Wave appears, a broad movement consisting of filmmakers, musicians and artists who reject the categories of cultural consumerism (in contrast to the New Wave phenomenon) and instead approach artistic production as an uncontrollable life experience. The No Wave movement is representative of different factors specific to the 1980s: activism based on associationism (inseparable from the creation of independent social centres and venues, such as ABC No Rio), the importance of self-production, personalties and the poetics of care-giving in times of extreme conservatism, and the role of music and music scenes as communicating vessels linking film, video, performance and the visual arts. 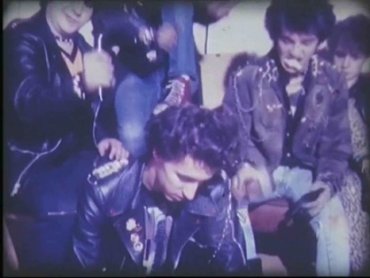 Session 7. Attitudes of denial in the Spanish context

This session presents a set of manifestations related to post-punk as a case study of the situation in Spain. Traditionally interpreted in relation to the movida madrileña, these interventions show a counterpoint to affirmative celebration and are characterised by the outbreak of violence and denial. With a continual music soundtrack, the session shows the incipient subculture ambience in Spain in the period between the country’s transition to democracy and the consolidation of its current democratic system, as well as different collective manifestations that distance themselves from the officialization of counterculture and offer a critique of the future State of autonomous communities. 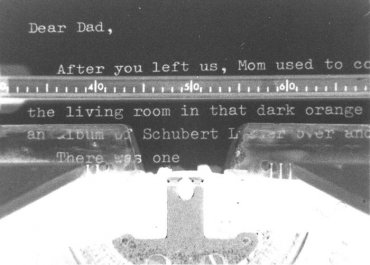 The expansion of neo-conservatism that characterises the 1980s at the international level brought the end of the so-called second wave feminism, known for the intense feminist activism that dominated the two preceding decades. However, in contrast to this apparent retreat, there arises a feminist theory based on the impossibility of developing a universal category of “woman,” which is translated into the emergency of a series of practices focussing on the visualisation of non-normative sexualities or on racial difference, influenced by post-colonial theory. The three films in this session play with the idea of identity as a performative construction, and thus Jollies and Sink or Swim propose an autobiographical narrative while Trin T. Minh-ha, in something near linguistic ethnography, describes how the gaze outwards can be an encounter with oneself. 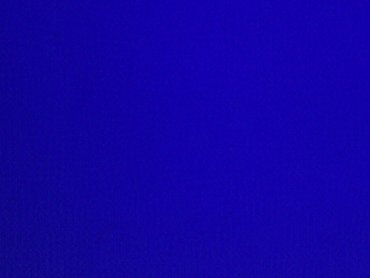 This session presents two divergent voices in the representation of the 1980s and 90s pandemic. David Wojnarowicz, an artist linked to the No Wave, made this video the same year that his partner, Peter Hujar, died of AIDS, and he himself found out that he was infected. Still censured in recent showings in the United States, A Fire in My Belly is a cry from the most abject, scopic violence, offended bodies, blood and injury. On the other hand, the filmmaker Derek Jarman presents in Blue, his last film before dying of the illness, a contained and poetic vision with an autobiographical tone. Blue shows a saturated blue screen that submerges the spectator in the blindness that the virus caused in the filmmaker, while his off-screen voice reflects on the health policies of the Thatcher government and makes oblique references to his life. Despite their differences, the two works share an idea put forward by Douglas Crimp, that of being images free of moralism with respect to AIDS.

Free admission but space is limited