Free, with prior ticket collection at the Museo Ticket Offices and online from two days before each session. A maximum of two tickets per person. Screenings can be accessed with drinks and snacks. Once the film is being screened, viewers are not allowed to gain access or leave.

All films will be screened in digital format.

With the support of:

This summer’s film season explores the idea of neighbourhood cinema as an open, local space, in which images prompt a dialogue on the history, local residents, aspirations and desires inhabiting Madrid’s Lavapiés barrio. Not only is this neighbourhood the home of the Museo, it is also an example of a historic quarter transformed by the complex dynamics of real-estate speculation and a large influx of tourists, a similar story in numerous international-scale city centres. Lavapiés, authentic and outspoken, refuses to fade, reaffirming itself again and again as a space of opposition and social reinvention. To put it another way, the neighbourhood it has always been.

The history of Lavapiés is the history of Madrid, but its most working-class, low-income, tumultuous and rebellious side, the town detached from the royal courts, the seat of power. The opening sessions in the series show early films which focus on and are shot in this neighbourhood: Lavapiés, tough and subversive (Esencia de verbena and Domingo de Carnaval); the first disembarkation point for rural exodus (Surcos), and abashed in its misery (El verdugo); its conception as a brittle paradise (Bajarse al moro) and a repository of rebellion and local memory (Madrid); the search for local resistance (A ras del suelo) where others only sniff get-rich-quick opportunities (Las manos sobre la ciudad).

The second half of the series moves away from Madrid, looking to other geographical and mental coordinates for its identity, unearthing the sprawling imagery and sensibilities that shape and mould the neighbourhood. The desires and limits of the capacity to embrace human beings (The Other Side of Hope and Hotel Cambridge); recollecting the junction between activism and contemporary art (The Yes Men); and, in the final stretch, extolled snippets of better worlds to which the cultures running through the neighbourhood have contributed: the creative defence of territory and ways of life from ideological and generational confluence (Tous au Larzac!); the experience of subjects, love and care demonstrated by ecofeminism and hacktivism (Donna Haraway: Story Telling for Earthly Survival); and the generous, open and united tradition of Islam (Al-Massir).

The films will be introduced by members of collectives, artists, and intellectuals – local residents, ultimately – who will relate their field of work with the theme of each session, illustrating the richness of the barrio’s associative network. The series opens with a concert by the group Variedades Azafrán and their contemporary take on authentic popular music from Madrid. 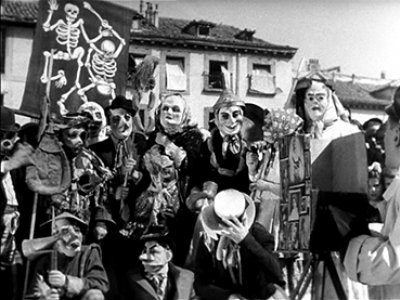 Esencia de verbena is an urban symphony, akin to those filmed on Berlin, Paris and Moscow at the end of the 1920s, depicting Madrid through the typical local verbena festivities held in its neighbourhoods. (Edgar Neville)

“Domingo de carnaval is a one-act farce in Madrid, in which a murder plot is interwoven; a storyline in which a police-type mystery intervenes; but it is, above all, an etching, or rather, a moving Solana painting. The action takes place in El Rastro market over the three days of Carnival in 1917 and 1918, with a grotesque crowd with masks of all kinds that move and convulse on a backdrop as thrilling as El Rastro. Some scenes take place at the top of the Pradera de San Isidro, the Goyaesque profile of Madrid in the background. Lastly, I hope everything has that bustling joy of Goya’s The Burial of the Sardine” (Edgar Neville) 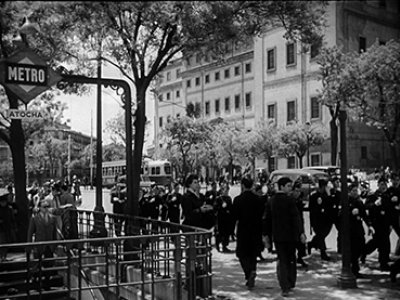 Presented by: Memorias en red. Impresiones, a research association that works with studies of memory and spaces of encounters for Lavapiés residents who want to share their experiences, memories and affections.

A family moves from the country to the city in search of better living conditions. “I was presented with this story, which was if anything Arnicheseque, but with the crucial intervention of Gonzalo Torrente Ballester we turned it into a social consideration… Surcos was put together in a way that is now commonplace in French and Italian cinema: with background information. We compiled photographs and interviews for over a month, and dressed the actors in the clothes the local residents actually wore… Even the outdoor scenes were filmed with direct sound”. (José Antonio Nieves Conde). 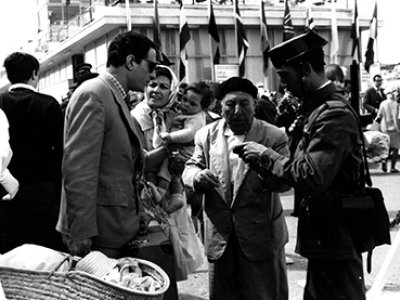 Presented by: PAH Centro, a Platform for People Affected by Mortgages in the Madrid neighbourhoods of Austrias-Letras, Lavapiés, Arganzuela and Malasaña, and Sindicato de Inquilinas e Inquilinos, an organisation which defends tenants’ rights.

In the guise of a satire about the death penalty during the Franco regime, Berlanga and Azcona created an in-depth and heart-breaking depiction of moral misery in a country which is at once infantilised and repressed. José Luis and Carmen, an executioner applicant and his daughter, dream of leaving the congested neighbourhood of Lavapiés –a marriage and a cosy little apartment on the outskirts in exchange for committing to the cruelty of the Dictatorship. The horizon already forebodes the consequences of this submission, part and parcel of the Transition: tourism and the rampant growth of construction are the economy’s only driving forces. 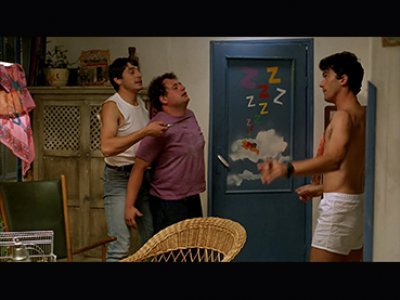 In an adaptation of the eponymous play by José Luis Alonso de Santos, the endeavours to rework the performance space result in a profusion of images from the Lavapiés neighbourhood, furnished with characteristics that would shape its mythology in the years that followed: a free and accommodating area, where youth is provisionally elongated until there is no choice but to settle down. This film is one of the richest and longest-lasting works on bohemia that defined the area, and which today is becoming ever more difficult to find.

This session opens with the first short film by a young film-maker who, new to Madrid, unsuccessfully attempted to unsnarl the history and identity of the city by exploring the naming of its streets.

“Madrid is the country’s capital and an indifferent host to its governing powers [...] It’s as though its apparent resignation to live in discord has developed overt escape mechanisms which are completely unrelated to the regional pretensions of other regions with a different historical conscience. It’s a muted discord that endures and is willing to throng the streets and squares again with the strange instinct of something extraordinarily human that re-touches inner fibres. With the certainty that a film camera will be, and will continue to be, in any corner recording certain gestures and indicating something more than local authenticity; in order for its collective speech not to end up being lost in the vacuum of time”. (Basilio Martín Patino). 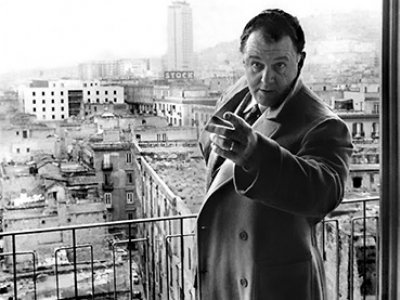 Set in Naples, Rosi’s home town, the film explores the relationship between the physical make-up of the metropolis and its invisible power structure, laying bare the rotting foundations of both. Real-estate developer Édoardo Nottola plans to build skyscrapers with the blessing of City Hall — where Nottola is also conveniently a councillor. However, the fatal collapse of a block of flats forces alliances to be redressed, with the ideology, not to mention the morality, of the calculated risks the last thing on the councillors’ minds. Hands on the City is one of the bluntest historical manifestations of the thick weft of gentrification. 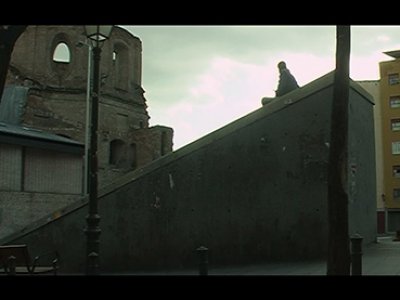 The camera pans through the streets of Madrid’s Lavapiés neighbourhood, immersed in an eye-catching process of redevelopment, to focus on the daily turn of events for different residents and their acts of protest against the local authorities, and on the daily encounters between the characters, filmed low down, ‘at ground level’. An out-of-reach health centre, fake-smile, close-fisted politicians, a TV churning out news behind reality’s back, citizens that give free rein to local knowledge despite their poor living conditions. This film is an example of street-level neighbourhood cinema. 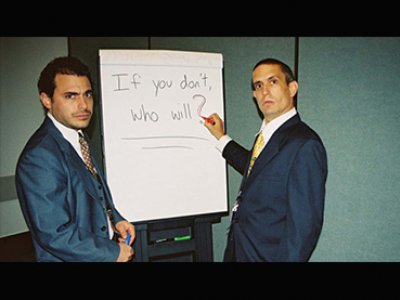 The aim of The Yes Men is to call out corporations with parodies that turn the public’s attention towards their harmful and immoral practices. The idea of art as sabotage to dismantle our day-to-day, wielded by these artists/activists, is in tune with the interventions of different Lavapiés collectives in the late 1990s and early 2000s.

“When trying to understand how a machine works, it helps to expose its guts. The same can be said of powerful people or corporations. By catching powerful entities off guard, you can momentarily expose them to public scrutiny. This way, everyone sees how they work and can figure out how to control them. We call this identity correction”. (The Yes Men). 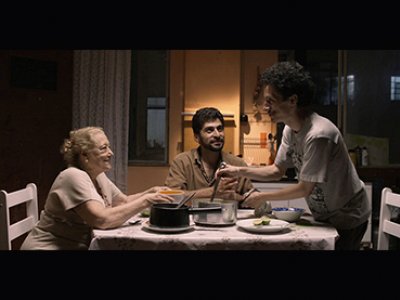 In 2012 the abandoned Hotel Cambridge building was occupied by MSTC (Movimento Sem-Teto do Centro). Inside the building live 170 families, not just from Brazil but also immigrants and refugees from countries like Bolivia, Haiti, Palestine, Cameroon and the Dominican Republic. Their way of organising goes beyond the obligations required to live together and continue squatting; here the creation of bonds is a priority. Film-maker and activist Eliane Caffe films community life in the hotel — the threat of eviction permanently looming — with a mix of professional actors and the actual residents. 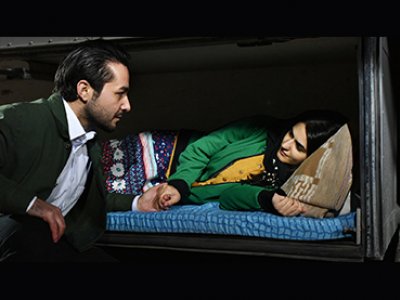 Toivon tuolla puolen (The Other Side of Hope), 2016
Finland, colour, original version with Spanish subtitles, 98'

In the latest film by one of the most important directors in recent times, a young Syrian refugee seeks asylum in Finland, but comes up against the cruelty and absurdity of the legal system. From this point on, he will have to live from the solidarity of others, characters that have featured heavily in Kaurismäki’s films, and who also face new first-world problems: the disappearance of certain trades, futile globalisation, isolation, a lack of empathy and cruelty as the predominant form of behaviour. 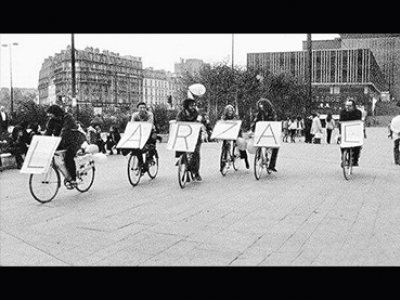 Presented by: the people in charge of Muestra de Cine de Lavapiés, an event which screens free films in different spaces (squares, empty lots, bookshops, social centres, bars...) around Lavapiés every year in June and July.

This feature-length film recounts a struggle. In 1971, the announcement of the expansion of a military base signals the start of the ‘self-taught militancy’ of 103 male and female farmers who, under the threat of expropriation and to defend their land, change sides and join hippies and insubordinates with different ideologies. The Larzac Committees group together the left-wing working class and farmers, anarcho-syndicalists, Maoists, and Catholic farmers. An unconventional melange in which the assets of each group serve the common good, thus creating a productive anomaly that the Lavapiés community has likened to life in the neighbourhood. 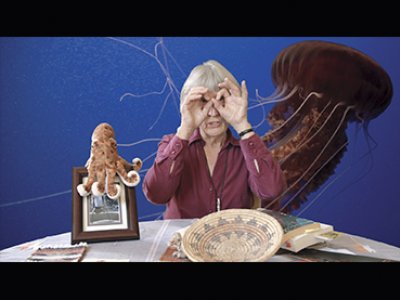 Presented by: Fabrizio Terranova and Fefa Vila, a professor of Gender Relations in Contemporary Society at the Complutense University of Madrid and a queer-feminist activist.

The main premise of the film is how activism is no longer linked to an idea or territory, but to the defence of diverse ways of life, amply demonstrated in Lavapiés in recent years. Haraway, an impassioned speaker, discusses this and other issues: capitalism and Anthropocene, science fiction as philosophical writing, unconventional sexual and family relations, the suppression of women writers, the relationship between species and the need for new post-colonial and post-patriarchal narratives: “With her inimitable brilliance and wit, Donna Haraway takes us on an exhilarating journey that combines sharp theoretical insights and moving personal moments. An intellectual giant comes to life as never before. Enjoy the ride!” (Rosi Braidotti). 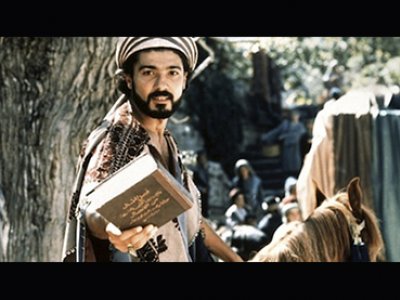 Destiny is Youssef Chahine’s vehement reaction to the attacks of Egypt’s Islamic fundamentalists after the censorship of his previous film Al-Mohager (The Emigrant) and the assassination attempt on his friend, the writer Naguib Mahfuz. Through an open interpretation of the life of Averroes, an Andalus philosopher, and with the spirit of classic adventure, Chahine demonstrates that fundamentalism is not exclusive to our era or to Islam, and nor is tolerance and intellectual curiosity exclusive to Europe. The film, a coda to the series, sets forth religious difference as a source of vital and intellectual wealth, in lieu of its associations with fundamentalism and misery, a common representation in the media.