The contradictions and enigmas of Andrej Wróblewski (1927–1957) are tackled by a painter and a film-maker as they run through lateral and unknown interpretations of an intense and complex body of work. The painter Luc Tuymans, who engages in conversation with Ulrich Loock, and the film-maker Andrzej Wajda, via the premiere of his latest film Wróblewski According to Wajda, contemplate paintings that still challenge interpretive frameworks of 20th-century art history today. A realist and at the same time abstract, an individualist whilst also an advocate of collective artistic practice, experimental yet socially committed, Wróblewski considers a series of ambivalences through his work that call into question key aspects from both his own epoch and the present: the relationship between art and political ideology during totalitarianism, the possibilities for painting after the historical avant-garde movements, and the dilemmas between communication and experimentation in a world that was devastated after the war, among numerous other aspects.

Andrzej Wróblewski’s work barely spanned a decade, from the time of his participation at the First Exhibition of Modern Art (Kraków 1948), alongside Tadeusz Kantor and other artists, until his death in an accident in 1957. Between these two points in time a space opened in which a series of styles and opposing approaches would converge, for instance Geometric Abstraction, Socialist Realism, caricature and satire and Existentialist Surrealism. As a whole, this contradictory amassing uncovers painting’s place in the aftermath of The Second World War as it was caught between scepticism and historical avant-garde movements, the ethical obligation to publicly narrate trauma and the drive to imagine another future. In the artist's own words, it was about a dilemma concentrated between an understanding of “modernity as a laboratory of art techniques”, and producing “images that were as unpleasant as the smell of a dead body.”

This activity marks the end of the exhibition Andrzej Wróblewski. Recto / Verso, the broadest retrospective thus far on the work of this artist outside of Poland.

Ulrich Loock. An Independent curator and art critic, and previously the director of Kunsthalle Bern and Kunstmuseum Luzern and deputy director of the Serralves Foundation, Porto. He has also organised a wide range of exhibitions, as either an independent or institutional curator, for seminal painters from 1970 to the present day, including René Daniëls, Christopher Wool, Gerhard Richter, Marlene Dumas and Luc Tuymans.

Luc Tuymans. Artist. His work came to prominence internationally from the 1990s onwards and he has been the subject of solo exhibitions at Tate Modern (London, 2004), Moderna Museet (Malmö, 2009), Wexner Centre (Ohio, 2009), SFMoMA (San Francisco, 2009), Palaix des Beaux Arts (Brussels, 2011) and Haus der Kunst (Munich, 2008), among numerous other art centres. He also represented Belgium at the Venice Biennale in 2001, and his work can be found among the most illustrious collections, for instance the Art Institute of Chicago, the Centre Georges Pompidou Paris, the Pinakothek der Moderne, Munich, and the Guggenheim Museum in New York.

Andrzej Wajdá. Film-maker. A member of the Polish Film School and the director of over thirty fiction films, including the noteworthy trilogy Generation (1955), Kanal (1957) and Ashes and Diamonds (1958) on life in Poland during World War Two and construed as a monument to human resistance. His awards include the Palme d’Or at Cannes for Man of Iron (1981), and an Academy Award (1999) and the Golden Bear (2006) at the Berlin International Film Festival in honour of his lifetime achievements. He is also a reference point in world and Eastern European cinema. 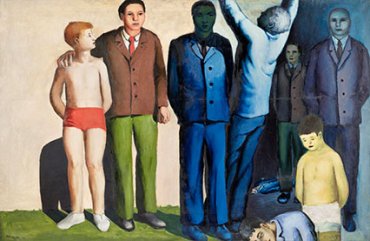 Andrzej Wróblewski’s search to find his own place, questioning both socialist government authorities and post-war experimentalism, meant that the artist would not find solace in his own times, but instead, paradoxically, his explorations have been cast into our present. At the beginning of the 1990s, the Belgian painter Luc Tuymans discovered a dual meaning in the Polish artist’s work as it revealed drama and spectre with which to reinvent history painting. The trauma of memory, the constant repetition in series and spatial meaning in Wróblewski’s narrative would be decisive in approaching the modern-day painting that lies between realism and abstraction. 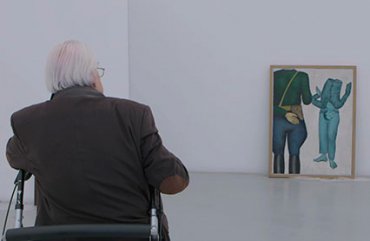 Andrzej Wajda. Wróblewski According to Wajda

Andrzej Wajdá is the most pre-eminent member of the Polish Film School movement, which also included film-makers such as Andrzej Munk, Wojciech Has, Feliks Falk and Jerzy Kawalerowicz. His work binds modernity from new European cinema and a reflection on national and identity issues in Poland, and this film, his most recent, sees the director of Kanal (1957) narrate an account of his own relationship with Wróblewski during the montage of an historic retrospective exhibition in the Manggha Museum in Kraków, the fourth show focused on the painter’s work. The film-maker, a contemporary of the painter’s generation, decided to relinquish painting after discovering his friend’s unique oeuvre, and would later take charge of organising the first solo exhibition devoted to Wróblewski, held in 1956, and the first collective exhibition centred on his work and held after his death in 1958. Furthermore, both projects were linked via a series of reciprocations and coincidences the film-maker and painter kept up at the time by way of an intense epistolary exchange.

Until full capacity is reached