The audiovisual programs are intended to counteract the predo nt model of the black cube, even at a time in which both film and video have become fully integrated and dissolved into contemporary art museums. Their aim is to explore the projected image using different formats and discourses: historical series that broaden – and question – the narrations told by the Collection, retrospectives that draw attention to other stories in the audiovisual history and programs that examine the close links that film and video have with contemporary artistic practices. At the same time, this programming seeks to define a space for film and video outside of the usual circuits, describing itineraries distinct from the spectacle and its derivatives. 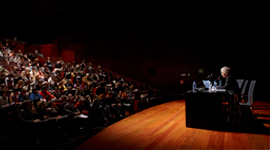