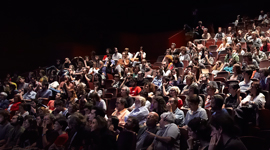 The music, dance and performance activities that feature in the Museo Reina Sofía programme are closely linked to the theoretical discourse in the organisation of the exhibition programme and the narrative in the Collection. Along with its own activities, the Museo also produces other shared activities that are the result of ongoing dialogue with a number of established collaborators. These activities include festivals, theatre performances, music conservatories, independent spaces, etc.