The work of Luis Gordillo spans more than five decades. He began his career by developing a new pictorial language that became a point of reference for an entire generation of artists who were beginning their search far from the prevailing Informalist and Conceptual tendencies. His work forged a new path in the context of Spanish art in the second half of the 1960s, through elements such as his treatment of figuration in dialogue with abstraction and in tune with Pop Art, experimentation with photos, the multiplication of dissociated images in series, the imagery related to materials used by the media, the presence of advertisements and comics. In Caballero cubista aux larmes (Cubist Gentleman aux Larmes), Gordillo uses irony to address the subject of the position of the individual in an urban setting that is highly technified and dominated by consumerism and alienation. The figure appearing in the painting reflects the artist’s interest in different creative sources that flow in parallel, as a sort of rhizome: making reference to the Golden Age of Spanish painting and at the same time to Cubism, there appears a divided character that represents the schizoid vision of the world that will motivate the work of an entire generation of Spanish painters in the 1970s.

Room 428
Artworks in the collection

Room 428
Luis Gordillo. The Rational and the Sentimental 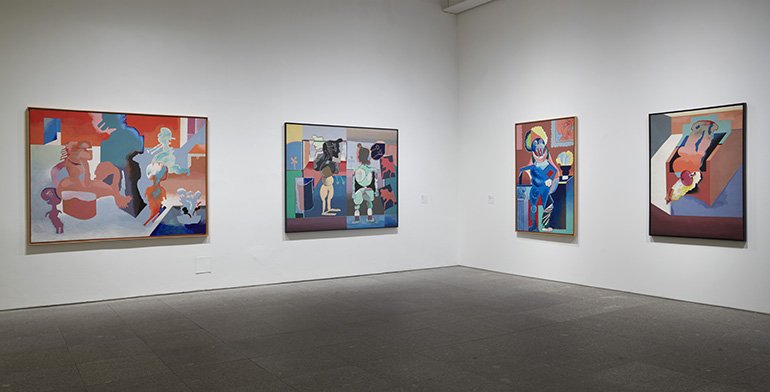