We wholeheartedly condemn all forms of racism and we hope that, in the aftermath sparked by the tragic death of George Floyd, this implacable wave of protests and demonstrations can produce irrevocable change towards a more just and equal society.

In modern and contemporary art museums we experience art and its ideas as agents of social transformation, as actively being part of a framework of relationships on multiple scales. We do not want to stay on the margins. We want to be spheres that resonate and take a stance, which is why we stand with all people affected by politics underpinned by racism and discrimination across the world.

We join the myriad voices which, from streets and institutions, demand that black lives matter, now and always. With that in mind, we wish to share the work NOW! by Cuban director Santiago Álvarez (Havana, Cuba, 1919–1998). Conceived as a news broadcast to be screened in cinemas in 1965, the film constitutes one of the most emphatic condemnations of US police brutality against African Americans. Álvarez, one of the inventors of montage documentary — “give me two photos, a song, a novel and a moviola and I’ll give you a film”, he claimed — shows a series of photographs of anti-racism protests and their brutal suppression in the 1960s. Sadly, these images could have been taken on the streets of any American city this week. The backdrop to the film is the voice of jazz singer, actress and activist Lena Horne (New York, USA, 1917–2010), in a song with words we make our own: “Now is the moment / Now is the moment / Come on, we’ve put it off long enough / Now, no more waiting / No hesitating / Now, now”.

We associate the overwhelming and current uprising in this short film with the graphic art campaign Argentinian artist Juan Carlos Romero (1931–2017) propelled with the Southern Conceptualisms Network in 2009. “We Are All Black” was the slogan that confronted the fatuous celebration of the bicentenary of independence in Mexico, Argentina and other Latin American countries, and which ignored the memory of an earlier anti-colonial uprising: the Haitian Revolution. That campaign recovered a passage from the first constitution of Haiti written by Toussaint L'Ouverture, a black liberator, which proclaimed that: “all Haitian citizens, hereinafter, shall be known under the generic name of blacks”, explicitly including white women, Germans and Polish, and excluding those who were or would be slave owners. At the beginning of the 19th century, the status of “black” was put forward as a political and cultural denomination, thus disobeying racial or biological categorisation. 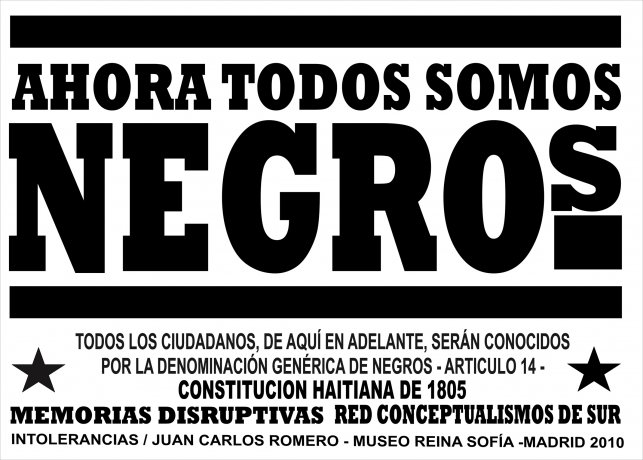 Now! We Are All Black

Special thanks to ICAIC (the Cuban Institute of Art and Film Industry)
8 june, 2020
Video Cinema and video