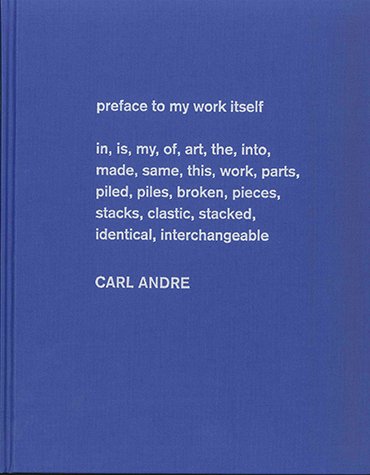 The catalogue from the exhibition Carl Andre. Sculpture as Place, 1958–2010 assembles a broad selection of work by the artist and poet Carl Andre (Quincy, Massachusetts, 1935), including his most influential works, produced with metallic plates, levers, ribbons and slopes, and lesser-known pieces, such as the works entitled Dada Forgeries. By the same token, this publication presents a compilation of thirteen texts, a conversation held between Andre and Phyllis Tuchman in 1976 and a diagram presenting a general vision of the different materials he used in his sculptures over the course of his career. This documentary work also contains a reference to the significance of the artist’s sculptural practice and its relationship with Minimalism, Land Art and Conceptual Art, as well as a reflection on the strong presence of language throughout his body of work.