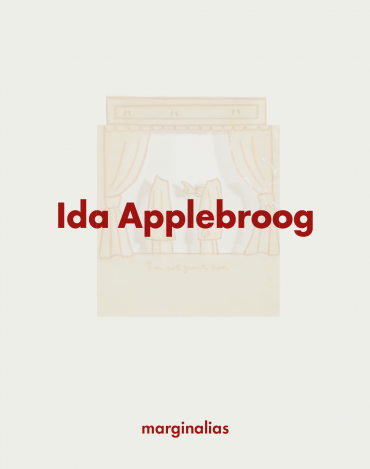 Over a period spanning more than five decades, Ida Applebroog has created visual imagery that brings together introspective exploration and a critical reflection of the world. Her body of work revolves around violence and its normalisation in patriarchal society, viewed by the artist as a symptom of global structural dysfunction. She also examines issues that include the vague limits between the public and the private and the growing processes of medicalisation in advanced societies.

This publication sees Soledad Liaño spotlight individuality in Applebroog’s work, making it difficult to frame inside a specific movement and which can be seen as a form of resistance against being confined to the clichés of hegemonic and univocal discourses. It also underscores the discursive and iconographic power, without relinquishing humour and irony, evoked by literary — including the theatre of Samuel Beckett — and artistic references. Moreover, the publication contains extracts from an extensive oral interview, conducted by Grace H. Glueck in 2008, which looks, biographically, at her relationship with technology, other artists, and her feminist stance, in addition to a selection of her red notebooks and images from the exhibition mounted in the Museo Reina Sofía, her largest retrospective to date.